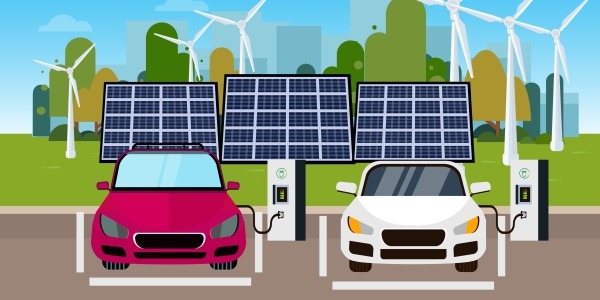 With India pledging to reduce their carbon footprint by 30-35% by 2030 in comparison to 2005, government bodies have taken multiple initiatives to encourage the use of renewable energy like solar. India being the cheapest solar producer in the world, there is no doubt that the opportunities to implement solar in multiple applications are endless. Since India has already set up projects up to 30GW to reduce its dependency on coal-powered energy, there is still scope to widen the use of solar in India.

With India receiving an ample amount of sunlight, it has the potential to generate solar energy in the majority of the land available. Transport being the second largest contributor of carbon emissions, using solar to reduce the dependency on petroleum can not only benefit the consumer economically but also help the environment. In this article, we will discuss how solar EPC solutions can help the transport industry reduce its dependency from petroleum and move towards sustainability to help India achieve its goal of reducing its carbon footprint.

Automobile Manufacturers are now innovating new economic solutions for the consumer to regain market share. One such innovation that has been trending for more than half a decade is electric vehicles. Early adopted by “Tesla” in 2008, many car companies have started replicating their model of designing eco-friendly cars.

With fuel prices rising every year in India, consumers are either switching to biogas or waiting for more economic alternatives. With Indian car manufacturers designing electric cars, the next question is to justify the new technology with access to charging stations.

Now, charging stations are built on two factors; space and reliable high voltage electricity. While this might be possible in urban areas, it is not possible in every rural area. To address this problem, the most economical solution is building a solar charging station. With a hybrid rooftop solar installation, consumers can charge their cars anytime without depending only on the unreliable and expensive grid-connected power. This is an economical and sustainable solution for the future.

The Indian railways is one of the early adopters of implementing solar at a large scale. Being one of the largest rail networks in the world, going solar completely can make a significant impact in reducing carbon emissions and help India achieve its goal of sustainability.

As mentioned in our previous article about uses of solar electricity, in 2017, the Indian railways commissioned their first solar in Guwahati railway station. With solar installation, Guwahati alone is able to reduce approximately 6 lakh kgs of carbon emissions every year.

This project has encouraged more railways stations to go solar. With more than 150 stations already gone solar, Indian Railways is expanding their solar presence in other regions of India. With projects already initiated in the north-east region of India, the railways have targeted to go 100% solar by 2022.

Solar run trains are also in the initial stages of development for future implementation.

Solar installation in Airports and Airplanes

In 2015, Cochin airport in Kerala was the first airport in the world to go solar. Since the rooftop solar installation has the limitation of partly powering the airport, they installed ground-mounted solar to power the entire airport with clean energy. The success of this project has encouraged other state airports like Delhi to go solar. With “Solar Impulse” (solar airplane) gaining success in its launch, there is still room for development that can allow solar to power a passenger airplane.

Unlike other transport sectors, the water transportation segment has started implementing solar panels on boats at a very small scale. The majority of these projects are still under the developing phase and are being developed in the U.S. and in India, small solar-powered passenger boats in Rajasthan are used for tourism purposes.

With three of the major transport sectors encouraging and adopting solar installation, the future of the transport industry looks clean and sustainable. Visit us next time for more knowledge sharing articles.

nextEverything You Need To Know Before Choosing Your Solar Panels